About 200 protesters gather in Bethpage 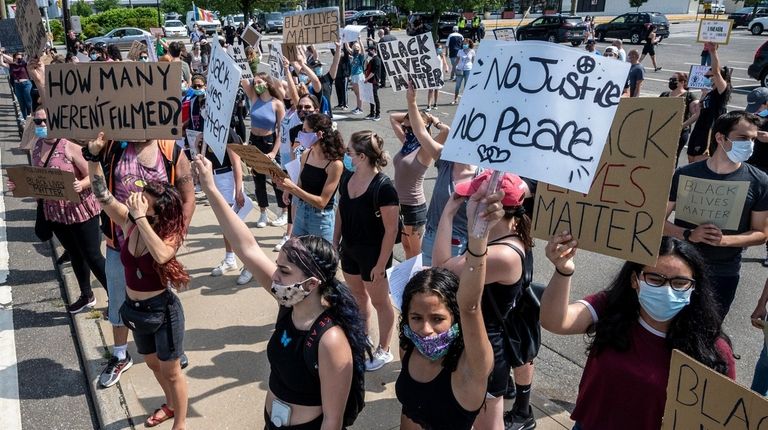 About 200 protesters lined Stewart Avenue in Bethpage Saturday, the seventh day of protests on Long Island against racism and police brutality after a black man was killed in Minneapolis police custody.

Protesters chanted “black lives matter” among other slogans while also handing out hand sanitizer and water and registering people to vote.

“As long as we keep peace and unity as the primary purpose in mind, you need to provide information how to actually implement change,” said organizer Nicole Nirenberg, 31, of East Meadow. “Standing on a sidewalk makes us feel together, but we need to do more. At the end of the day we’re standing up against racism on Long Island.”

Co-organizer Christina Lemyre, 31, of Bellmore said the protest was not anti-police but encouraged reforms such as requiring body cameras for police.

“This nuisance is becoming a movement,” Lemyre said. “I love that it’s stopping traffic and pulling people out of their homes. It’s an opportunity for everyone. Racism has no place on Long Island. It’s 2020. Enough is enough, silence is violence and we’re done.”

On Long Island, only Suffolk County police and Freeport police have body cameras. Nassau County has explored adding cameras but have said they are weighing the expense. The PBA has backed including cameras in contract negotiations.

Nassau County Police Commissioner Patrick Ryder, who supervised Saturday’s protest in Bethpage, said there have been no arrests or criminal mischief in Nassau County during the duration of the protests.